With the assistance of funding from the East Berwickshire U3A, Eyemouth Museum Trust have established a small research facility aimed principally at assisting residents of and visitors to Eastern Berwickshire with research into their family history.  It is recognised that presently anyone wishing to do research must either visit Edinburgh, Hawick or Galashiels, all some considerable distance away and from the number of enquiries received by the museum, it is obvious that there is a demand for this service.

Our aim is to make information available and assist with your research and the only charges made will be to cover costs of printing and access to Scotland’s People and other related websites.  We can also offer to carry out a minimum amount of research at reasonable cost.

We have made space available to provide the service which will be manned initially by a research assistant each Monday between 10am and 12pm and also by appointment.  The centre is affiliated to the Borders Family History Society and all their resources will be accessible, with some publications being offered for sale. 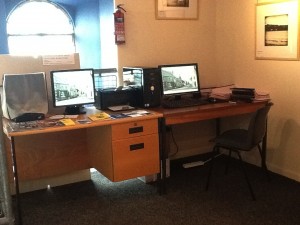 We have provided a computer with internet access to obtain information on Old Parish Records, Births, Deaths and Marriages, Census Details, Newspaper Archives, Ships Lists and Old Maps.
Paper copies of the 1841, 1851 ad 1861 Census for all towns and villages in Eastern Berwickshire are available. Additionally, we have a copy of the 1881 Census for the whole of the UK in a set of CDs.

We have copies of all the Memorial Inscriptions available for Eastern Berwickshire Village Churchyards, pre-1855 Memorial Inscriptions for all of Berwickshire, details of some Irregular Marriages at Lamberton Toll and some Registers for Greenlaw Jail.  We also have a copy of Mortcloth Records for Coldingham between 1694 and 1759 and are collecting all information we can that might be of assistance to those having an interest in local and family history.

While disabled access is not available to the area presently being used for this facility, it is intended to ensure that the service is available to all with an area within the Tapestry Room being available as required to meet this particular need.  In the longer term it is planned, subject to finance becoming available, to have an extension to the upper floor of the museum complete with lift access.

Your ticket for the: Family History Research